#01 SUNDAY 15.11.15 at 13.00
Daniel Goldin is 15 years old and has played the violin since the age of 9. He is a student of professor Isaac Schuldman in the Young Talents program at Barratt Due Institute of Music. Daniel has played in several orchestras, and is now part of Junior Orchestra at Barratt Due. He also playes regularily with a quartet instructed by Anne Britt Årdal. 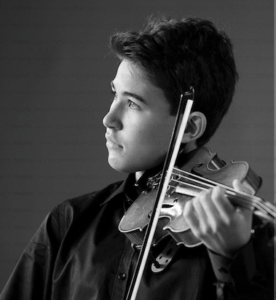 #02 SUNDAY 6.12.15 at 13.00
The trio –Koop,Nilsen, Koop- started up in August 2015. All three of them are pupils at Music at the Majorstuen school, which is an educational program in classical music provided by Barratt Due in collaboration with the Norwegian Academy of Music. Despite their young age , the trio loves music and playing together. They have high ambitions for this trio.

Elise Koop (11) started playing the violin at the age of 4. She was a student of Suzuki at E. Storm until she was acceptet at Music at the Majorstuen school. Since February 2015 she has studied under Isaac Schuldman. Elisa has experience from the childrens orchestra and the junior ensemble at Barratt Due Institute of Music. At the very young age of 7 she played with the concertseries Childrens Concert House and she regularily plays concerts on small and big stages. Elise participated and won first prize in the competition Jugend Musiziert in Paris this year, together with her brother Nikolai Koop.

Nikolai Koop (13) started playing the piano at the age of 7. He studies at Music at the Majorstuen school and is a student of Marina Pliassova in the Young Talents program at Barratt Due Institute of Music. Nikolai has participated in several competitions, both in Norway and abroad. He won the first prize in Jugend Musiziert two years in a row, first prize in the competition the Midgard competition and second prize in the national final in the competition Young Musician Championship. Nikolai is an active contributor to chamber- and soloconcerts.

Nora Dahl Nilsen (15) has played the cello since the age of 7 and the violin since the age of 3. She previously studied at Barratt Due Institute of Music. In 2015 she was accepted to the talentprogram Young Musicians at the Norwegian Academy of Music, and is currently taught by Kari Ravnan and Geir Tore Larsen. Nora has participated in several competitions and she is well experienced with playing in orchestras. This summer she was the leader of her group in the Norwegian Youth Symphony Orchestra. Nora is now in her last year of study at Music at Majorstuen school.